We are currently in our second year of the UT study.  In 2019 we had trouble timing our grazing, but this year our grazing went very well. Last year we saw more trampling than grazing due to the height and growth stage of the cover crops. This year we were able to get the cattle in each plot when the cover crops were still palatable, so we saw the opposite effect of 2019. Each grazed plot had the cattle in them for 24 hours at a time, and each plot was grazed two times. Our cattle loved eating the cover crops so much that they ran to the next plot like children running out to recess. Overall, the cover crops and grazing looked much better than they did in 2019. 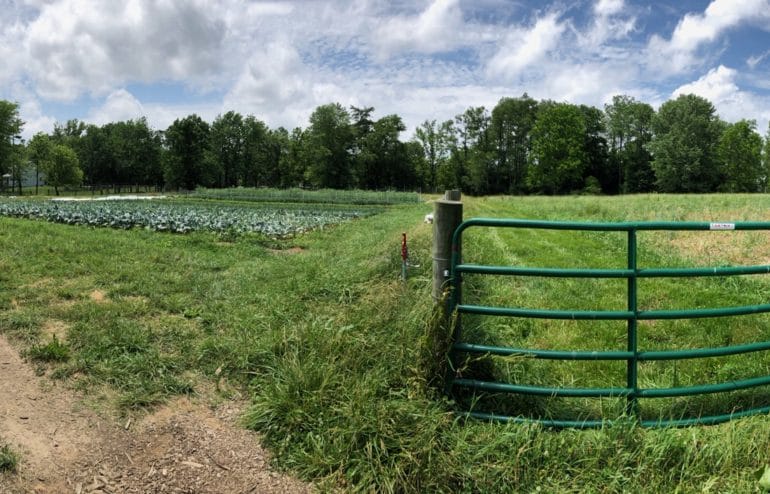 In our pursuit of being a truly generative farm, we’ve been practicing and studying a pre-industrialized farming method called Ley farming. This is a rotational technique in which crops, forage, and animals are all used in various stages in a field’s life cycle to increase the fertility and the health of the soil. Our research team recently collected soil samples as part of our ongoing Ley Field Research Project in which we are studying the benefits of integrating crop and livestock systems. Samples were taken from two fields,  both in different stages of the Ley rotation system. Field one (GALR1) had been recently grazed by cattle, while the second field (GALR2) had just finished two years of crop production. The samples were sent in for analyses on soil health and nutrients. The table below displays the results of select soil measurement.

The results from fields that had been recently grazed (GALR1) compared to fields coming off two years of crop production (GALR2) showed some interesting trends. GALR2 had the lowest levels of organic matter (providing nutrients and habitat to soil organisms) and trace minerals (key elements in plant growth), which is to be expected after two years of plant production. Conversely, GALR1 had much higher levels of organic matter and trace minerals. Results indicate cattle can increase organic matter by manure and plant incorporation into the soil. Cattle may also be cycling the trace minerals by consuming and then returning them to the soil. The soil health score ranges from 0-30 and the higher the number the better the soil is, but anything above a 7 is considered to be healthy. Although both fields have healthy soil,  GALR2 did have a lower score, consistent with other measurements. 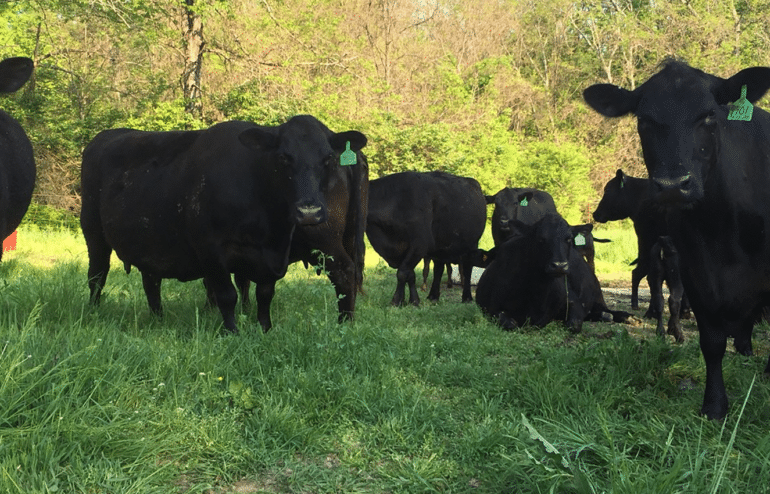 In 2016 Greenacres partnered with Dr. Jason Rowntree and Michigan State University (MSU) to gain a better understanding of the nutritional quality associated with grass-fed beef.  The results of that partnership was a 3 year study culminating in Greenacres’ first two peer-reviewed manuscripts.  The MSU partnership also led to some interesting and unique findings compared to the existing literature.  Not all beef labeled as “grass-fed” comes with the nutritional halo that one might expect from a grass-fed product.  Grass-fed beef is advertised as a good source of vitamins A and E as well as having a more favorable omega-6 to omega-3 ratio (most often reported as 2:1), compared to grain-fed beef.  However, the data we collected from over 750 grass-fed beef samples sourced from across the U.S. suggest that nutritionally speaking, not all grass-fed products are created equal.  Our findings showed that some grass-fed beef contained untraceable amounts of vitamin A and omega-3 fatty acids and had omega-6 to omega-3 ratios in excess of 28:1, almost 3 times the amount one would expect from grain-fed beef.

What was the driver behind these variations?  The answer is not so easy.  The data we collected on production methods were based on an online survey, filled out by producers who submitted samples.  However, not all participants agreed to fill out the survey.  In addition, surveys can be unreliable sources of information.  After analyzing the survey data there were some potential culprits, namely harvested forages (haylage and/or bailage) as well as grain by-products, such as soy hulls. During the “finishing phase” (the period in the last 60-90 days when the cattle convert energy into intramuscular fat) not all grass-fed animals eat grass on pasture.  Some grass-fed protocols allow for producers to use feeds other than fresh grass.  This could include harvested forages that are dried (hay) or fermented (haylage) or other types of roughage.  As long as the cattle do not receive the grain of a plant (e.g. soybean hulls, which are ground up soybean plants but do not include the soybean itself) they can still be marketed as “grass-fed”.   Even when these products were indicated in the surveys, they did not always correlate to nutritional variations.  This left us scratching our heads.

Discovering the drivers of the nutritional quality of grass-fed beef has important implications for both producers and consumers alike.  Producers want to produce a premium product that is desired by consumers and grass-fed beef consumers might count nutritional density as a factor in their purchasing decisions.  Identifying what factors impact the nutritional quality of the product could lead to recommendations for producers to improve their product as well as an increase in consumer acceptance.

To gain a better understanding of the root of the nutritional anomalies, Greenacres is partnering with Dr. Rowntree and MSU for a second time.  This study will be conducted at MSU’s Kellogg Biological Station over the 2020 and 2021 production seasons.  During this study we will be providing different types of “grass-fed” feeding regimens to groups of cattle.  These treatments will include: 100% fresh forages on pasture; fresh forages + hay supplementation; fresh forages + soy hull supplementation; and harvested forages fed in confinement to represent the “feedlot grass-fed” model.  Each treatment will be randomized and replicated to ensure scientific rigor.  The findings will be peer-reviewed and published at the conclusion of the study. 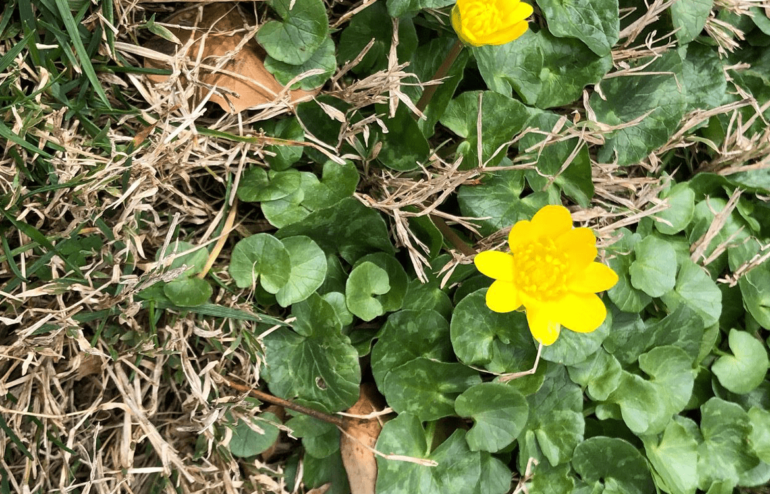 Lesser celandine (Ficaria verna) is a broadleaf plant with a yellow flower, which is native to Europe and Western Asia. In North America it is considered to be a highly invasive plant. You can find it growing in 21 of the lower 48 states, and in southern parts of Canada.

Lesser celandine produces both seeds and bulbils. This type of reproduction strategy causes it to be highly invasive, and allows it to spread like wildfire. The three easiest and fastest ways it spreads are water ways, boots of hikers, and hooves of ungulates. The spread of lesser celandine begins to create dense green carpets in our woods and lawns. Studies have shown that these “carpets” inhibit native wildflowers and other plants from finishing their life cycles. When these native wildflowers and plants cannot finish their life cycles, pollinators are losing their sources of nectar and mammals are losing food sources. Can the mammals just eat the celandine instead? Unfortunately no, because lesser celandine has compounds that make it taste bitter and possibly toxic to mammals. These are just a few out of many ecological impacts that are the driving forces to research ways to eradicate lesser celandine from our woods and lawns.

We are starting a research project in early 2020 to test eradication methods of lesser celandine. We will be testing the effects of hand removal, and two types of herbicides: glyphosate and metsulfuron. We will measure cover of celandine and count other species pre and post treatment. This study will likely be a multiple year study because other data shows lesser celandine needs multiple rounds of treatments to eliminate it.

Below are photos of lesser celandine before and after it flowers, and the dense carpet it creates.